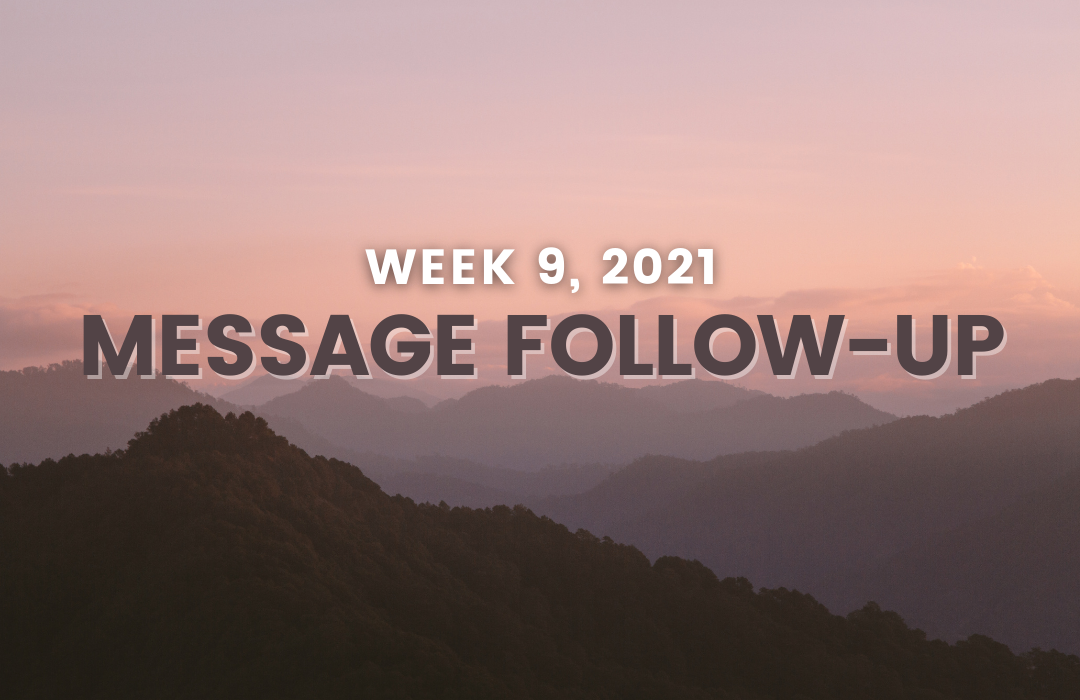 If you talk to anyone who has designed something, whether a child who just finished his or her first artistic masterpiece or the person who just finished designing the newest skyscraper or fighter jet or whatever and you will find that what they designed should not be altered. The original plan was meant to be the plan and any amount of altering results, in the creator’s eyes, a messed-up plan. Now obviously in the realm of humanity the original design of something rarely, if ever, works as intended. But when we learn about the things that God has designed, in His word, we recognize that he designed them perfectly. We see this clearly in the creation account when he designed and created plants or animals or the earth and the heavens and the fish and the moon and the sun and man and he called it all “good” or “very good.” This was his creation and his design, and it was a good one, and it was untainted. Over the last number of weeks, we’ve been in texts that speak of what it looks like to follow Christ; what we call discipleship – learning Christ. And even in this excursus we’re on here in this sermon, we continue to be directed towards understanding what it looks like to follow Christ, specifically as it pertains to the institution of marriage. As disciples of Christ, our marriages reflect the beauty of God’s design. Our marriages, as those who follow Christ, must come under the rule of Jesus Christ and be a means to joining him in his mission to glorify God, build the church and save sinners. And that will be best done in marriages that not only stay together but stay together gladly and faithfully according to God’s perfect design.

“And Pharisees came up and in order to test him asked, “Is it lawful for a man to divorce his wife?” He answered them, “What did Moses command you?” They said, “Moses allowed a man to write a certificate of divorce and to send her away.” And Jesus said to them, “Because of your hardness of heart he wrote you this commandment. But from the beginning of creation, ‘God made them male and female.’ ‘Therefore a man shall leave his father and mother and hold fast to his wife,and the two shall become one flesh.’ So they are no longer two but one flesh. What therefore God has joined together, let not man separate.” And in the house the disciples asked him again about this matter.” (Mark 10:2–10 ESV)

The Main Point of the Sermon
As disciples of Christ, our marriages reflect the beauty of God’s design.

How does this sermon apply to those who are unmarried? Consider first that as a disciple of Christ, this beautiful design he has created in marriage is one that you must hold to and understand well should you ever marry. Whether you ever get married or not isn’t the point – but if you were to get married this conviction of the high calling God has in marriage is one that you must have! And of course, you would want to know that your potential spouse has those same high convictions. These things are vital.

But secondly, each who are unmarried know someone who is married, and quite possibly know someone or will know of someone who is struggling in their marriage and even considering divorce. And YOUR godly, biblical counsel may be the only counsel they receive from this perspective. Most counsel that couples who are going through difficulty receive is unbiblical counsel that is based on highly emotional circumstances. Your understanding, respect, and honor of God’s beautiful design in marriage is exactly what they need to hear and as I said, you may be the only voice that speaks that truth to them.

If you’re married, how can you apply this? If you have a good marriage, then pursue making it even better. Make it your goal to reflect the beauty of the union between Christ and the church as you love one another seen in your deep commitment to one another and your joy in one another.

Perhaps you have a difficult marriage. Maybe you’ve even considered divorce. You can apply this sermon by not keeping to yourself but by talking to us as your pastors about the difficulties. While the difficulties in marriage can be plentiful and at times seem overwhelming the truth is that the One who designed marriage will give grace to the humble man and woman who desire his help and is able to rescue you and your marriage. So, invite others into your life and listen to their counsel – as long as it’s biblical counsel. And do this not only as a way for peace to be felt in your home, but so the beauty of God’s design in marriage can be reflected in yours.

If you have been married already and have been divorced then you know the pain of it. You may struggle with anger and disappointment and condemnation. Let me first say that there is healing for you at the cross. No matter what led to that divorce there is forgiveness for you. Divorce isn’t the unforgivable sin. When you repented of your sin and turned by faith to Chris and his death and resurrection, then you were made one flesh with him. Your union with your spouse ended but not your union with Christ.

What reasoning led Paul, with his apostolic authority, to add desertion (which was not specified by Jesus) as another legitimate ground for divorce? In order to do this, he must have been persuaded that desertion by an unbeliever destroyed a marriage as much as adultery did. Once the unbeliever has departed, the man and woman are no longer living together and no longer acting in any sense as husband and wife. If the deserting spouse is an unbeliever, then he or she is beyond the reach of church discipline, and there is no reasonable human hope that the man and woman will ever again function as if they are husband and wife. The marriage has been destroyed. (Wayne Grudem)

Mark assumes here the teaching found elsewhere in the New Testament that marital unfaithfulness or blatant desertion may end a marriage in any case. In such circumstances a Christian may act as though his or her spouse were dead (the Old Testament punishment for such marital sin was death, leaving the individual free to remarry). – Sinclair Ferguson

TAKE TIME TO LISTEN TO AND READ
THE "ATTEND" LENTEN DEVOTIONAL