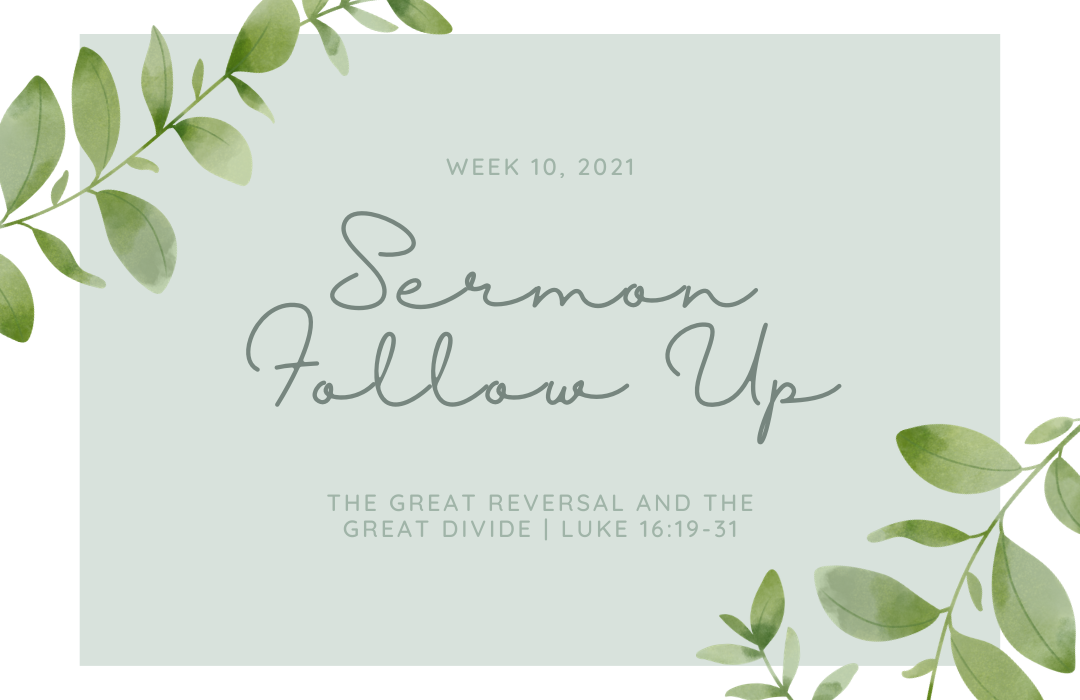 Sermon Summary
The shrewd manager of chapter 16:9, used wealth to gain eternal friendships, but the rich man fails to use his wealth to help a poor man at his gate and remains unrepentant to the very end—and therefore has no eternal “friend” to welcome him into the eternal dwellings and faces judgment. In everything the rich man does, in everything he says, he gives evidence time after time that he didn’t care in life nor cared in death about any real repentance and belief in Christ that led to good works, he only cared about himself. He failed to listen to the teachings of the scriptures, never repented nor believed, and now, after death, it’s too late to do anything about it. And the results of his choices are final.
And that’s the situation with the entire human race. We are divided in two. No matter the color, no matter the ethnicity, no matter the riches or the poverty, no matter the ease or the pain in life…there are only two kinds of people: those who through repentance and belief in the Christ of this book in this life are Jesus’ disciples and have the certain future of eternal life in heaven OR those who by unrepentance and unbelief of the Christ of this book in this life are not disciples of Jesus and have the certain future of eternal punishment.

The Sermon Text
““There was a rich man who was clothed in purple and fine linen and who feasted sumptuously every day. And at his gate was laid a poor man named Lazarus, covered with sores, who desired to be fed with what fell from the rich man’s table. Moreover, even the dogs came and licked his sores. The poor man died and was carried by the angels to Abraham’s side. The rich man also died and was buried, and in Hades, being in torment, he lifted up his eyes and saw Abraham far off and Lazarus at his side. And he called out, ‘Father Abraham, have mercy on me, and send Lazarus to dip the end of his finger in water and cool my tongue, for I am in anguish in this flame.’ But Abraham said, ‘Child, remember that you in your lifetime received your good things, and Lazarus in like manner bad things; but now he is comforted here, and you are in anguish. And besides all this, between us and you a great chasm has been fixed, in order that those who would pass from here to you may not be able, and none may cross from there to us.’ And he said, ‘Then I beg you, father, to send him to my father’s house— for I have five brothers—so that he may warn them, lest they also come into this place of torment.’ But Abraham said, ‘They have Moses and the Prophets; let them hear them.’ And he said, ‘No, father Abraham, but if someone goes to them from the dead, they will repent.’ He said to him, ‘If they do not hear Moses and the Prophets, neither will they be convinced if someone should rise from the dead.’”” (Luke 16:19–31 ESV)

The Main Point of the Sermon
The future state of every person depends on a heart of humble repentance and faith.

The issue with the rich man is that he loved money. He craved money and all that came with it. Outwardly, he claimed to know Abraham – he called him Father Abraham, indicating that he professed to be a child of God. But when the reality of his faith was tested by the presence of Lazarus laying on his doorstep he failed as it seems that he routinely refused to be moved by compassion and to offer even the smallest degree of help to that needy man. The lack of fruit in his life as it specifically was revealed through his finances revealed a cold, dead heart and shows that his faith was not the real deal, it was dead faith – for faith without works is dead. Question…Are we aware of the eternally severe consequences of being snared by a love of money?

Jesus believed that all human life continued beyond the grave. He describes the two men as being in two entirely different, distinctly separate, very real locations. The Bible knows of only these two options. Two entirely real places that each person who ever lives will know for eternity once this brief life is past. Question…What do you believe? And how does your true belief inform how you live, how you think, how you interact with others in this world?

Quesiton: How does the experience of the poor, sickly, crippled, dog-licked man who had nothing in this life but had laid up hope in the life to come an encouragement to you in the face of trials you are currently experiencing? How might his story be used by God to prepare you for suffering in this life?

I asked the following questions in the sermon: "Do you listen to the Bible? What kind of attention do you pay to it? Do you listen to and follow what the word of God teaches? It’s in the bible where we find everything we need in order to be saved. Do you read it? Do you listen to it? Do you seek to hear it explained to you so that you can act on what it teaches rather than just filling your mind with knowledge that only puffs up or deceiving yourself thinking you can hear the word and not follow it without consequences? Question: What about it? Are you a hearer of the word AND a doer? How so? How might you grow, this week, in this vital area?

I stated the following towards the end of the sermon today: "The reality is that humanity is divided in two. No matter the color, no matter the ethnicity, no matter the riches or the poverty, no matter the ease or the pain in life…there are only two kinds of people: those who through repentance and belief in the Christ of this book in this life are Jesus’ disciples and have the certain future of eternal life in heaven OR those who by unrepentance and unbelief of the Christ of this book in this life are not disciples of Jesus and have the certain future of eternal punishment. There is a great divide between the self-sufficient, self-saturated, religious yet godless lovers of money rather than lovers of God and those who renounce all that they have and entrust their all to Jesus and find in him their all in all, their salvation, hope and joy. The divide in this life is significant but it is bridgeable. The fact is, while a person remains alive it is possible to move from the unbelieving, unrepentant side where there is no hope to the believing, repentant side where there is eternal hope. And responding by repentance and faith to the teaching of the gospel of Jesus Christ found in the Word of God, the Bible is all we need to do so. We don’t have to perform a long list of good deeds, we simply need to respond to the gospel: to believe on the Lord Jesus Christ NOW and we will be saved. Friends, If we have not embraced this gospel of God’s grace by the time we die it will be too late…the great divide will be fixed forever." Question: Have you embraced the gospel in repentance and faith? If so, take time to thank God for his mercy in your life. If not, consider the entirety of this message and call on Christ to give you a heart of repentance and trust in him. Is this the message that is on your tongue as you interact with those whom God has placed you around who currently do not believe and are on their way to eternal punishment? What is one step you might take this week to speak this truth to someone?

Lazarus, who never was invited to an earthly banquet, is escorted to the seat of honor by angels (David Garland).

He was so used to power in his old life and the clout his money gave him that he acts as if things are unchanged even in Hades. He does not repent and thinks that he can order Abraham to send Lazarus to be his lackey (David Garland).

Vaneetha Risner
A Continuing Story of a woman suffering in this life with two weary eyes fixed on that final day while wrestling with and enjoying trusting God in the here and now.

Below is a wonderful one-hour video hearing from four people wrestling with unique difficulties while fixing their eyes on Jesus and Heaven. Super encouraging.