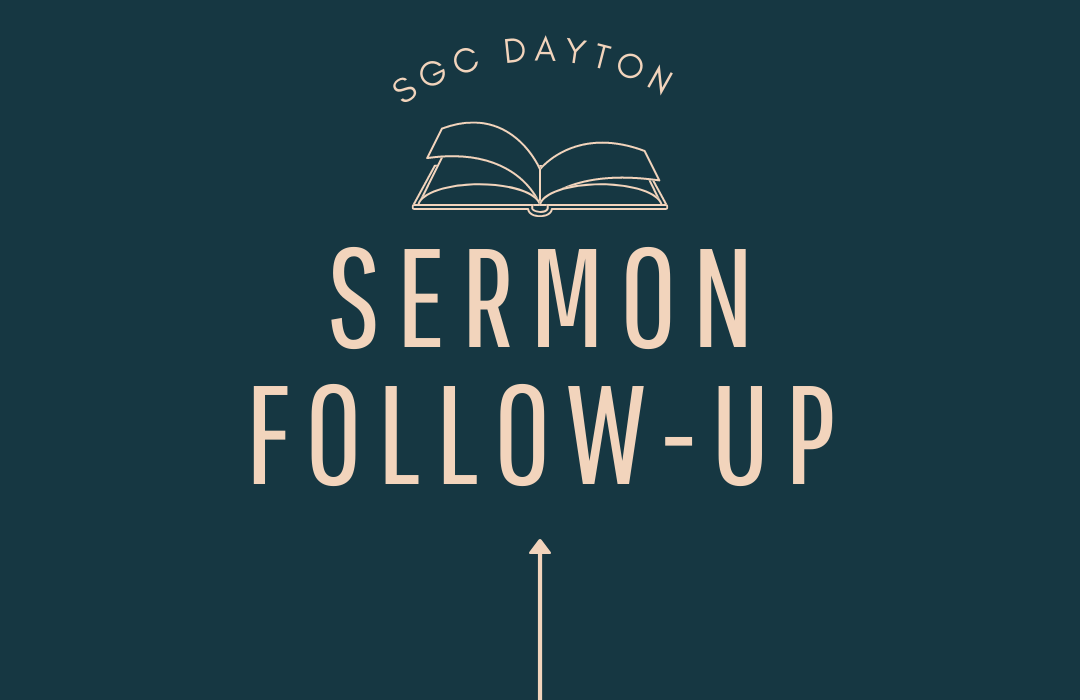 This passage tells us a story that speaks of the absolutely enormous need we have to see Jesus rightly in the Word of God. If we don’t see Jesus there and understand Him and His commandment from the entirety of the Word of God we won’t only be blind amid the various sorrows of unmet expectations of this temporal life but we will be entirely lost and without hope for eternity. That’s simply just how serious this is. And just as these two disciples needed to experience real life in seeing and believing, really knowing Christ, so do we also need to be given the sight to see Christ clearly in God’s word and have our very own hearts burn within us that we might live in the joy and power of his resurrection and tell others about the life we’ve found in Jesus alone.

“That very day two of them were going to a village named Emmaus, about seven miles from Jerusalem, and they were talking with each other about all these things that had happened. While they were talking and discussing together, Jesus himself drew near and went with them. But their eyes were kept from recognizing him. And he said to them, “What is this conversation that you are holding with each other as you walk?” And they stood still, looking sad. Then one of them, named Cleopas, answered him, “Are you the only visitor to Jerusalem who does not know the things that have happened there in these days?” And he said to them, “What things?” And they said to him, “Concerning Jesus of Nazareth, a man who was a prophet mighty in deed and word before God and all the people, and how our chief priests and rulers delivered him up to be condemned to death, and crucified him. But we had hoped that he was the one to redeem Israel. Yes, and besides all this, it is now the third day since these things happened. Moreover, some women of our company amazed us. They were at the tomb early in the morning, and when they did not find his body, they came back saying that they had even seen a vision of angels, who said that he was alive. Some of those who were with us went to the tomb and found it just as the women had said, but him they did not see.” And he said to them, “O foolish ones, and slow of heart to believe all that the prophets have spoken! Was it not necessary that the Christ should suffer these things and enter into his glory?” And beginning with Moses and all the Prophets, he interpreted to them in all the Scriptures the things concerning himself. So they drew near to the village to which they were going. He acted as if he were going farther, but they urged him strongly, saying, “Stay with us, for it is toward evening and the day is now far spent.” So he went in to stay with them. When he was at table with them, he took the bread and blessed and broke it and gave it to them. And their eyes were opened, and they recognized him. And he vanished from their sight. They said to each other, “Did not our hearts burn within us while he talked to us on the road, while he opened to us the Scriptures?” And they rose that same hour and returned to Jerusalem. And they found the eleven and those who were with them gathered together, saying, “The Lord has risen indeed, and has appeared to Simon!” Then they told what had happened on the road, and how he was known to them in the breaking of the bread.” (Luke 24:13–35 ESV)

MAIN POINT
Your heart will warm in the nearness of God by believing what the Bible tells you about Jesus.

1. The Overwhelming Sorrows of Life Come from Our Failure to Believe the Word of God (vv. 13-24)

They failed to believe who Jesus really is (v. 19). These disciples, having spent hours and days, weeks and months with Jesus were still blinded by some other understanding of who Jesus is even though they’ve witnessed Jesus repeatedly declaring and proving that He is the Son of God, the Savior, the Christ.

In order for their eyes to be opened amid all the grief and lostness of their life, they, along with every single one of us, have to understand first and foremost that Jesus is the Son of God and not just a mighty Prophet as many may say, and almost every other religious system out there accepts him as. When one fails to believe who Jesus says he is and revealed himself to be as the Son of God, the sorrows and the temporal joys of this life will only lead to confusion, grief, and a sense of general meaninglessness.

They failed to believe that the Death of Jesus was the plan of God (v.20). The fact that these disciples believed Jesus to be something less than the actual Son of God, they believed that the will of man usurped whatever supposed power they had witnessed and experienced in Jesus. All they could see was the situation that was right before them. The circumstances they were facing at that time. The promises and plans of God, and the teachings of Jesus that they had heard with their own ears, not anywhere to be found in their processing. Their lack of belief in and blindness of the purposes and plans of God thoughout scripture (and that which was on the lips of Jesus) culminated in the grief and hopelessness they felt on that road.

They failed to believe the extent of the redemption of mankind (v. 21). They believed that when the Messiah came He would liberate them from Roman oppression and free them to rule over themselves. They thought that Israel would be saved from the Romans, that redemption looked like freedom from Roman occupation. But the disciples failed to actually take Jesus at his word and they evidently are reeling from the dashing of those false hopes and are blinded to the hope of the redemption of both Jew and Gentile through the sacrifice of Jesus himself.

They failed to believe Jesus’ own words (vv. 22-24). Though these disciples most certainly had heard Jesus say that he would rise on the third day, they had been deaf to it, and were in fact blind to the power of the resurrection. So blind that even after its occurrence they were utterly confused by the excited report of the women who had witnessed with their own eyes the empty tomb. Their disbelief caused their ears to be closed to the reports of his resurrection and culminated in their hopes being gone and causing despair and grief to take their place. Sadness in the place of joy all because they did not believe. Overwhelmed by the circumstances and difficulties and sorrows of life all because they did not believe the very words and actions of the very one they had spent time with.

As Jesus takes the disciples through the OT explaining from Moses to the Prophets just how all of them are referring to Him and that His death was a planned event even from the very beginning; as He explains to them that He is more than a Prophet but the very Son of God and how His death and resurrection is for all who believe from the very beginning to the very last day and how the breadth of redemption includes Gentiles of every tongue and nation as well as believing Jews; as He explains that He was God’s Covenant-Keeper for all whom God chooses… what does Jesus do, but stay with them just a bit farther and sits with them (v. 30) and breaks bread with them – had dinner with them. And it was in the everyday activity of eating together with them that their eyes are opened and he was known, he was truly believed. They had been with Jesus in their blind unbelief, but now they see Jesus and know him with ever-warming hearts of trust and full belief. Their response?

“… “Did not our hearts burn within us while he talked to us on the road, while he opened to us the Scriptures?” And they rose that same hour and returned to Jerusalem. And they found the eleven and those who were with them gathered together, saying, “The Lord has risen indeed, and has appeared to Simon!” Then they told what had happened on the road, and how he was known to them in the breaking of the bread.” (Luke 24:32–35 ESV)