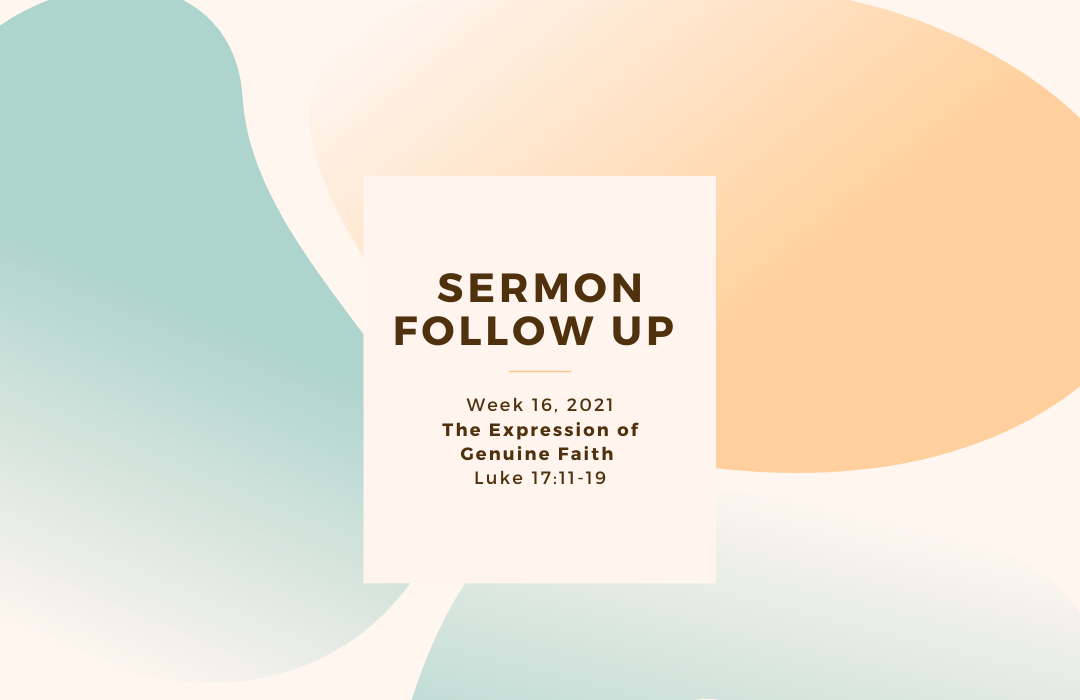 Up to this chapter in this book that is an orderly accounting of the life of Jesus that is written to help a likely Roman official named Theophilus to be certain of the things that he had been taught. We’ve been walking with Him at this section in the gospel of Luke toward Jerusalem. For many months now he has been going back and forth through Israel preaching the good news of the kingdom, doing many miracles, healings, and casting out demons. We’ve witnessed him showing compassion and sympathy, tenderness and mercy, yet speaking pretty straightforwardly about judgment; about hell and punishment. He’s been proclaiming this message to wake up the people of Israel to the absolute necessity of looking to him alone as their Lord, Savior, and Redeemer.

While Jesus is on his way to Jerusalem (beginning in 9:51), 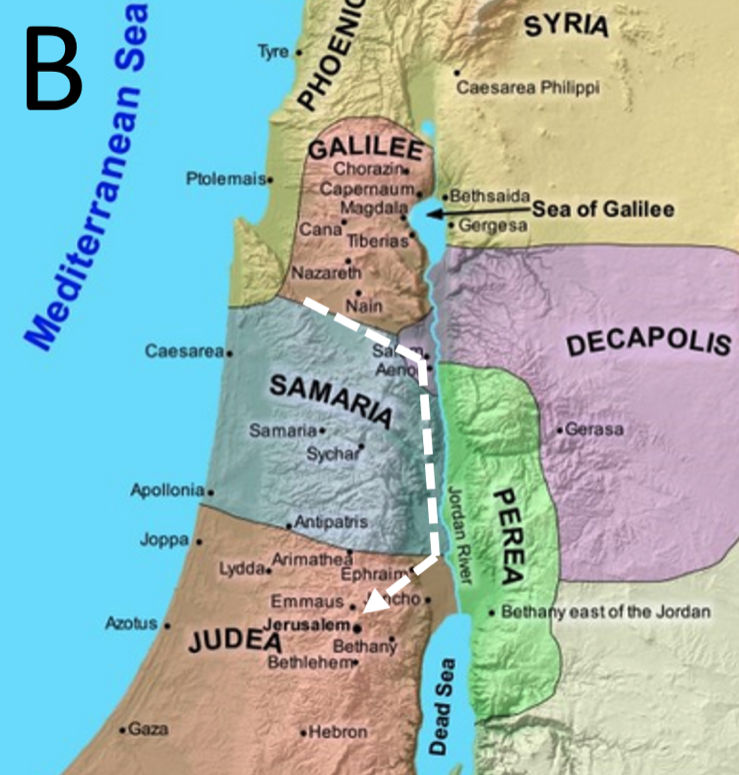 Throughout this entire section, the focus has been on the overarching wonders of faith – a disciple’s belief and experience of having received the mercy of God and how it informs one’s life.

“On the way to Jerusalem he was passing along between Samaria and Galilee. And as he entered a village, he was met by ten lepers, who stood at a distance and lifted up their voices, saying, “Jesus, Master, have mercy on us.” When he saw them he said to them, “Go and show yourselves to the priests.” And as they went they were cleansed. Then one of them, when he saw that he was healed, turned back, praising God with a loud voice; and he fell on his face at Jesus’ feet, giving him thanks. Now he was a Samaritan. Then Jesus answered, “Were not ten cleansed? Where are the nine? Was no one found to return and give praise to God except this foreigner?” And he said to him, “Rise and go your way; your faith has made you well.”” (Luke 17:11–19 ESV)

The genuine faith of a disciple of Jesus is revealed in their posture of humble worship.

One of them, when he saw that he was healed, stopped in his tracks, turned around, left his mates and came back, as you might imagine, full of joy. How life is going to change for this man. His family. His friendships. His interaction with others. You can imagine how many things would be going through his mind. Certainly, this was happening as well to the other nine guys as they continued on to the priests at the temple where they would once again be able to join the worship there. But one thing stands out for this one, healed leper. One thing that is fundamentally different in this one man than the other nine. He realizes, in that moment, that this Jesus whom he had just cried out for mercy from was someone entirely other. Yes, he was glad for the healing. Who wouldn’t be?! But amid the wonder of the healing, this man realized in this moment, for the very first time that no matter what the other nine men did, no matter how much they may have tried to convince him to keep trucking to the temple, that this Jesus who had healed him was in fact not just a miracle man, but was someone entirely other and worthy of his worship. And so what he came back to do was to praise God with a loud voice and fall on his face before Jesus. This is an act of worship.

1. Where did everyone go?

Jesus is simply stating that they ought to be here with this one Samaritan also. Where are they? Well, presumably to the priest and to the temple. They missed Jesus. They received healing mercy, but now saving mercy. They don't have any interest in Jesus anymore. They got what they wanted out of Him and they have no desire to worship Him, no desire to glorify Him, no desire to thank Him. They don't see Him as God. They don't fall down and give to Him what you only give to God. They don't glorify Him as God. So yes, ten were given healing mercy…but only one life was changed at the core on that day. The one man, the one man knew he needed a Savior. And he knew he had come face-to-face with God and his life was changed at the very core. He knew he was a sinner and was in desperate need of mercy. God owed him nothing…he owed God everything…just like the story that precedes this story. But he knew that God himself, under no obligation whatsoever, had showed him mercy and compassion, kindness and power and his response was one of true faith that expressed itself in praise and thanksgiving.

Consider
How many people have heard the good news of Jesus, have seen the works of God, even been recipients of the mercies of God, yet are like the nine who settle for the gifts and leave the Giver in their rearview mirror? Friends, for the one who has truly understood their desperate need for mercy not just in their temporal circumstances but their eternal condition before Holy God, this person’s life will be one marked by humble worship, praise and thanksgiving to God. The person of true, saving faith will continue to grow in understanding that we do not deserve anything from God, and that everything he gives us is mercy. And we become the most thankful people who live to glorify God and enjoy him forever.

“Was no one found to return and give praise to God except this foreigner?”” (Luke 17:18 ESV)

The Pharisees knew God and his word. They were familiar with God, but they were, in fact, his enemies. The people of Jesus’ hometown knew Jesus but they rejected him and tried to hurl him off a cliff. Familiar with Jesus, but filled with contempt for him nonetheless.

It seems that the other nine who were heading back to the priest and the temple were most likely Jews – Jesus seems to state pretty clearly that only the returning man was a Samaritan, a foreigner – so all these other men were accepted in the temple. They were God’s people. Now that the leprosy that unified them despite their historical hatred of each other was gone, the separation was clear. The Jews were clean and acceptable, not so the Samaritan. Sounds a lot like how the Pharisees viewed the outcasts Jesus spent time with. The reality is, these Israelites had been recipients of God’s healing mercy, but their familiarity with their nationalistic religion bred contempt for the Eternal Savior as they walked away from him right back into their contemptable self-sufficiency.

The man who returned to Jesus was not only healed of his leprosy, but saved. And he was a Samaritan. A foreigner. He had no access to the inner court of the temple. He was an outcast. He was doubly outcast as a leprous Samaritan…but now even without leprosy, he was still a Samaritan. Unaccepted. Outcast. Hated. He couldn’t go to the temple. But instead...

He walks right back face-to-face with God Himself and goes into His own Holy of Holies (John MacArthur).

This grateful Samaritan is yet another example of the outcast who believed. Like the Samaritan woman in John 4, or the tax collectors and sinners, the prostitutes who surrounded Jesus and of whom He said He'd come to call the sinners not the righteous. What we’ve been seeing in this gospel is that many people hear the message of Jesus. Many people enjoy the mercy of God in the power and compassion of Jesus. But in the end, only a few come, fall at His feet, glorify Him as God, worship Him, humble themselves, and offer Him thanks.

Take time to write out some answers in your journal/notebook

How can we grow to live lives of humble worship? One way to grow in this is to follow the example of this one man in the story. To praise God and give thanks to God with increasing regularity. From the moment we wake to a new day, breathing, heart beating, sun shining, rain pouring, to the drinks and foods we enjoy, to the flowers we smell and the friends we laugh with and the people we grieve with, in our interactions with neighbors and co-workers, when we see God meet someone in their difficulty, when we sense God’s nearness, when we are confronted by a problem that forces us to depend on God – each and every one of those things, along with just the enormous and eternal implications of gospel grace in our lives, are blessings from God and true faith expresses itself in humble worship, praise and thanksgiving.

How will you respond to this? You can be blessed by God in many ways and still have contempt for God. He is merciful. The rain falls on the just and the unjust. You can hear the story of the gospel week in and week out and still just walk away while your heart beats and your lungs breathe on account of the patient mercy and provision of your Creator. You can even thank God for your health, or your family, or your job or whatever, but continue to walk away from him in your self-sufficiency and walk right into eternal hell. Or…and I pray that each will do this…you can recognize your need of mercy from God and turn back to Jesus, falling on your face in humble worship before him as your Master and Savior, and the miracle that he did for that man on that day, he will do for you, just as he has done on countless times among the nations for the last two thousand years. Trust in Christ, return to Him and believe on him and you will be saved.

Song - "How Can I Keep From Singing"