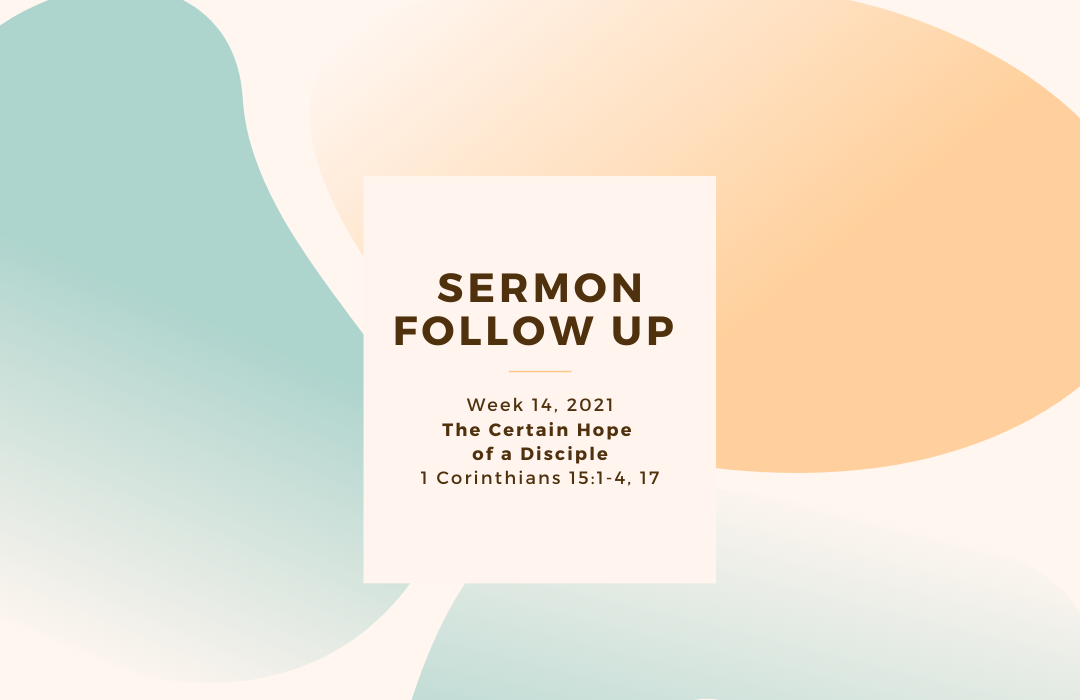 We live in a world where there are literally hundreds of things that disciples of Jesus are to know and understand and respond to and speak intelligently about, to defend, and protect. Certainly, we are to engage the culture with humility and the truth of God’s word. There is a tendency, a problem that is taking root, however, as the church increasingly does so. The tendency is that the central message of the gospel, the good news of Jesus Christ, can get uprooted and lost, confused and perhaps misunderstood, even forgotten among the difficult concern of the culture in our day. Christians today, in our culture, seem to be thought of more as political pawns then those who believe in and trust in the God of the message they proclaim. For instance, evangelical Christians are generally defined historically as those who first, believe that the Bible is God’s inspired, inerrant word and is therefore our final authority in all matters of life and doctrine, and second, believe that people are separated from God, and they need to be saved by responding to the gospel of Jesus Christ. But if you were to ask most people in our country, "what is it that evangelical Christians are primarily known for today," … well, it’s most likely not that. So, somehow something of such significance, even the primary message we’re to live out and speak of, has been lost amid the loud noise of cultural dissonance - or at the very least misunderstood or misrepresented amid the important concerns of our day.

It is a matter of first importance that we grow, as disciples of Jesus – as Christians - to become those who live out and profess one message. One clear message. There is only one message that the church has to live by and to share with others. It’s the same message that all true followers of Christ have had for the last two thousand years. It’s the message of the gospel of Jesus Christ. It is THE message that should inform who we are as Christians, how we live, and how we interact with a world that does not yet believe. It is the one message that cannot, must not, be altered. Certainly, we are called to be good, informed and active citizens in this land according to the guidelines of the constitution. But we are of those who believe that to be good, informed, and active citizens we must first and foremost and always be those whose lives and lips and actions are founded on the unalterable truth of the gospel of grace…the mercy of God in Christ.

We must remind ourselves, therefore,of the central and certain hope, the informing hope of the life of one who professes to be a disciple of Jesus.

“Now I would remind you, brothers, of the gospel I preached to you, which you received, in which you stand, and by which you are being saved, if you hold fast to the word I preached to you—unless you believed in vain. For I delivered to you as of first importance what I also received: that Christ died for our sins in accordance with the Scriptures, that he was buried, that he was raised on the third day in accordance with the Scriptures,...And if Christ has not been raised, your faith is futile and you are still in your sins." (1 Corinthians 15:1–4, 17 ESV)

The narrow hope of a disciple of Jesus is guaranteed through the broad accomplishments of Jesus in his death and resurrection.

1) What is of First Importance to a Disciple?

The Gospel is the Eternal Plan of God

The Gospel tells us that Jesus died for our sins

“But he was pierced for our transgressions; he was crushed for our iniquities; upon him was the chastisement that brought us peace, and with his wounds we are healed. All we like sheep have gone astray; we have turned—every one—to his own way; and the LORD has laid on him the iniquity of us all.” (Isaiah 53:5–6 ESV)

“And you, who were dead in your trespasses and the uncircumcision of your flesh, God made alive together with him, having forgiven us all our trespasses, by canceling the record of debt that stood against us with its legal demands. This he set aside, nailing it to the cross.” (Colossians 2:13–14 ESV)

“For God has done what the law, weakened by the flesh, could not do. By sending his own Son in the likeness of sinful flesh and for sin, he condemned sin in the flesh,” (Romans 8:3 ESV)

““For God so loved the world, that he gave his only Son, that whoever believes in him should not perish but have eternal life.” (John 3:16 ESV)

The Gospel tells us that Jesus was buried.

The Gospel tells us that Jesus was Raised to Life.

“Destroy this temple, and in three days I will raise it up.” The Jews then said, “It has taken forty-six years to build this temple, and will you raise it up in three days?” But he was speaking about the temple of his body. When therefore he was raised from the dead, his disciples remembered that he had said this, and they believed the Scripture and the word that Jesus had spoken.” (John 2:19–22 ESV)

2) Why is the Gospel of First Importance to a Disciple?

Our Regeneration Is Grounded in the Resurrection of Christ

“Blessed be the God and Father of our Lord Jesus Christ! According to his great mercy, he has caused us to be born again to a living hope through the resurrection of Jesus Christ from the dead,” (1 Peter 1:3 ESV)

“…even when we were dead in our trespasses, made us alive together with Christ—by grace you have been saved— and raised us up with him and seated us with him in the heavenly places in Christ Jesus,” (Ephesians 2:5–6 ESV)

Our Justification Is Grounded in the Resurrection of Christ

“… believe in him who raised from the dead Jesus our Lord, who was delivered up for our trespasses and raised for our justification.” (Romans 4:23–25 ESV)

When the Father in essence said to Christ, “All the penalty for sins has been paid and I find you not guilty but righteous in my sight,” he was thereby making the declaration that would also apply to us once we trusted in Christ for salvation. In this way Christ's resurrection also gave final proof that he had earned our justification (Systematic Theology).

For if Christ were not risen, it would be evidence that God was not yet satisfied for [our] sins. Now the resurrection is God declaring his satisfaction; he thereby declared that it was enough; Christ was thereby released from his work; Christ, as he was Mediator, is thereby justified (Miscellanies, Vol. 13, 227).

If it is not a fact that Christ literally rose from the grave, then you are still guilty before God. Your punishment has not been borne, yours sins have not been dealt with, you are yet in your sins. It matters that much: without the Resurrection you have no standing at all (MLJ - The Assurance of Our Salvation, 492).

Our Sanctification Is Grounded in the Resurrection of Christ

“What shall we say then? Are we to continue in sin that grace may abound? By no means! How can we who died to sin still live in it? Do you not know that all of us who have been baptized into Christ Jesus were baptized into his death? We were buried therefore with him by baptism into death, in order that, just as Christ was raised from the dead by the glory of the Father, we too might walk in newness of life.” (Romans 6:1–4 ESV)

“For if we have been united with him in a death like his, we shall certainly be united with him in a resurrection like his. We know that our old self was crucified with him in order that the body of sin might be brought to nothing, so that we would no longer be enslaved to sin. For one who has died has been set free from sin. Now if we have died with Christ, we believe that we will also live with him. We know that Christ, being raised from the dead, will never die again; death no longer has dominion over him. For the death he died he died to sin, once for all, but the life he lives he lives to God. So you also must consider yourselves dead to sin and alive to God in Christ Jesus.” (Romans 6:5–11 ESV)

“And if Christ has not been raised, your faith is futile and you are still in your sins.” (1 Corinthians 15:17 ESV)

Take time to write out some answers in your journal/notebook

What is the gospel to you? And perhaps more precisely, how does your understanding of the gospel inform your life and speech in all the various circumstances you find yourself as a student, a mom, a dad, a business owner, a citizen? Does the gospel inform your hope in this life? And, if so, how? Is this narrow hope a certain hope? Or is it just your religious tendencies? Or wishful thinking? This narrow message of the gospel, Paul states:
“… is folly to those who are perishing, but to us who are being saved it is the power of God.” (1 Corinthians 1:18 ESV) - Which is it TO YOU? And why?

How might knowing the gospel being the eternal plan of God encourage you personally as you consider the "personal" application of the gospel to you two thousand years after Christ's death?

The resurrection is a matter of first importance either positively or not. A person's eternity rests in the balance. If Jesus did not rise from the dead, live and let live. If he, in fact, did...well...how might that reality inform our interactions with those whom God has placed us around?

Consider Reading the
The Saving Work of Jesus Christ

Song - "Thank You Jesus for the Blood"

Song - "I Serve a Risen Savior"