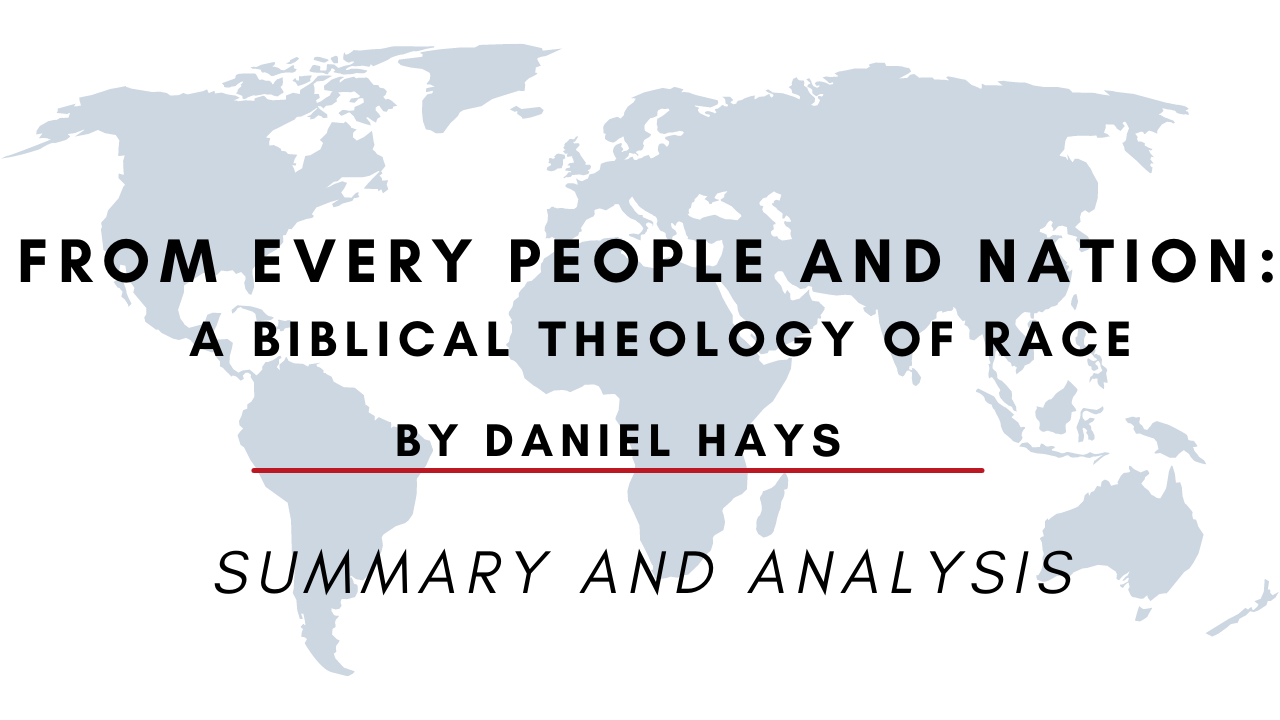 This month’s book in the Gospel & Race project is, From Every People and Nation: A Biblical Theology of Race, which is written by Daniel Hays and edited by D. A. Carson in the New Studies in Biblical Theology series. This book traces the theme of race/ethnicity that runs throughout Scripture from Genesis to Revelation, constantly pointing to the global and multiethnic dimensions inherent in the overarching redemptive plan of God.  Let me begin by identifying the main purpose of this book according to the author.

Main Thesis of the Book

Hays begins with identifying the visible divide in the church between black and white churches in America. He goes on to say that there is also a difference within black and white academic circles regarding the nature and scope of the problem. He says, “Black scholars identify the racial division in the Church as one of the most central problems for contemporary Christianity, while many White scholars are saying, ‘What problem?’” He doesn’t pretend that this book will diagnose all the problems surrounding this issue of race in the American church, rather, he has a much more attainable goal. What Hays hopes to do in this book is to “create a proper sociological background context from which to interpret biblical texts and to develop biblical theology regarding race” (p. 29). Based on this, he derives practical implications for race relations in the church of America that displays the beauty and power of the gospel.

Hays begins by rooting his biblical analysis in the reality that all peoples and nations and ethnicities have the same origin and are united by common humanity. However, our ethnic identities do play a role in the history of redemption. But what does he mean by ethnicity? Hays understands that typically ethnic identity is often seen as connected to either genetics (physical appearance), language, and/or religion. But also understands the complexity of defining ethnicity since it also includes the creation and maintenance of social boundaries,’ ancestry (real or mythic), dress, diet, and other factors as well (p.28). However, in this book, he attempts to discuss ethnic groups in this book along broad racial lines focusing on the issue of physical appearance. While he admits this may seem hazardous, it is a sufficient approach to develop his theological assertions and practical implications without getting bogged down in the details and complexity of defining ethnicity. The concluding chapter of this book has seven conclusions that serve as the big takeaways from his biblical-theological analysis of race. I’ll include a brief description under each point but would recommend reading the book to gain a better understanding of his arguments and conclusions.

7 Takeaways From the Book

The biblical world was multi-ethnic, and Blacks were involved in God’s unfolding plan of redemption from the beginning

One of his central claims in the book is that both the OT and NT worlds were multi-ethnic and not Anglo-American. Most of the characters in the Bible were Semitic. Even the tribes of Israel were not a distinct ethnicity but a mix of western Mesopotamian (Aramean and/or Amorite), Canaanite, and Egyptian. He goes on to note the significant role that Black Africans from Cush/Ethiopia played throughout scripture to include:

From this Hays dismantles the arguments that suggest that the Judeo-Christian tradition only came to Africa through White colonizers and slave traders. He also helps us see that Black Africans enter the picture of the Bible early in Genesis and continue throughout redemptive history.

This is simple enough to assert, but it has not been the reality that has been preached or practiced well in the church in America for the majority of our history (See review of Color of Compromise). This truth applies to any individual that believes, consciously or subconsciously, that their ethnicity is superior to another ethnic group.

Genesis 10 and the Abrahamic promise combine to form a theme that runs throughout Scripture, constantly pointing to the global and multi-ethnic elements inherent in the overarching plan of God

One of the things I appreciated about Hays is how well he traces the theme of race throughout redemptive history. Here is how he outlines how ethnicity interacts with God’s overarching plan of redemption throughout the pages of Scripture:

There is not much to add to his analysis here other than to note that our ethnicity, while not our primary identity, is not insignificant. Resorting to a colorblind lens when reading scripture can cause us to miss the beauty of multi-ethnic diversity that is characteristic of the people of God throughout history.

Racial intermarriage is sanctioned by Scripture

While many reading this likely do not have an issue with miscegenation, it was helpful to consider Hays arguments from Scripture. Here are a few passages that Hays used to defend interracial marriages between believers.

2) Paul’s proclamation of organic unity and total equality in the Church likewise destroys the barrier of racial intermarriage prohibition. (1 Cor 7:39).

Hays argues in this book that the gospel compels us to not only believe the right things concerning race but also to speak and act in a way that is consistent with our gospel witness. He points out the similarities in the ethnic-based tension between Jews and Samaritans in the ﬁrst century are analogous to the ethnic-based tensions between Blacks and Whites in North America today. The many accounts in Luke-Acts concerning Samaritans in very applicable for us in the church today. The story of the Good Samaritan is the most noteworthy that compels us to act out our theology and not be content with just talking about it theoretically. There is much room for me to grow in this area.

The New Testament demands active unity in the Church, a unity that explicitly joins differing ethnic groups together because of their common identity in Christ

As Christians, our primary identity is based on our union with Christ and is no longer based on lesser sociological connections. One helpful image that Hays points out is that Christians from other ethnicities are not just equal to us; they are joined to us.” (p.204). This picture of being joined together with believers from other ethnicities is a beautiful picture of the new humanity that we are now part of because of Christ. What could our church look like if we could grow in our love to see a small picture of this reality in our local church?

The picture of God’s people at the climax of history portrays a multi-ethnic congregation from every tribe, language, people, and nation, all gathered together in worship around God’s throne.

The book of Revelation gives us a glimpse of the people of God gathered around the throne of God worshipping him together at the consummation of history (Rev 5:9-10). According to Hays, this picture reflects the fourfold formula of Genesis 10 (every tribe, language, people, and nation) and stresses the multi-ethnic diversity of the people of God who will be worshipping him for all eternity!

Hays provides a helpful overview of the multiethnic nature of the biblical world as well as the multi-ethnic nature of the plan of God as revealed from Genesis to Revelation.  No matter the racial tension we see in our culture today, my hope and prayer is that the church can provide a glimpse of hope to the watching world in the way we display our unity in Christ across ethnic lines. There is already much grace and desire toward this end that is evidenced in our small local church through inter-ethnic marriages, inter-ethnic adoptions, and relationships across ethnic lines. My prayer is that this would grow more and more in the years and moths to come. This book had helped me gain a grand vision of ‘the people of God’ not as just some abstract group of people, but in the way John describes it, as people from every tribe and every language and every nation, all gathered around the throne, worshipping the Lamb together. Oh for that day when we see the Lord bring this reality to pass! This picture of the ultimate reality is a model for us to strive towards even now as we pray “thy kingdom come; thy will be done on earth as it is in heaven.”