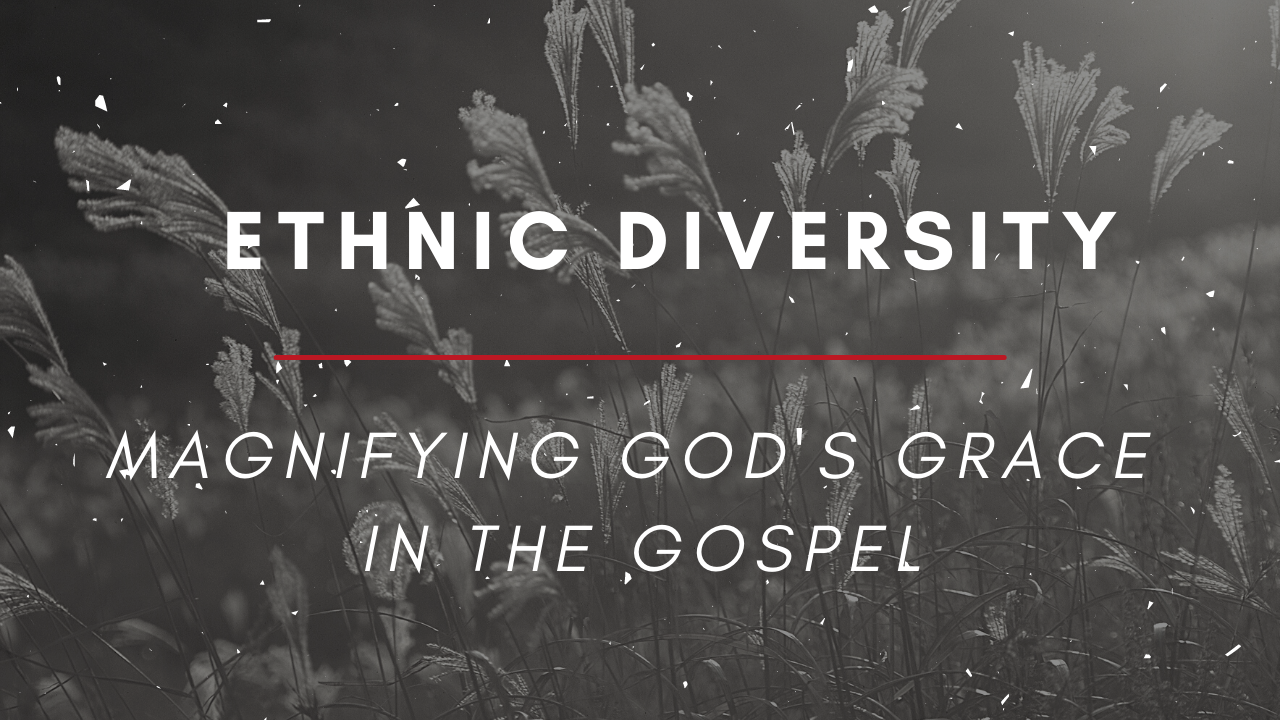 Why should we pursue ethnic diversity in our church? Is this diversity for diversity’s sake or maybe something that our culture tells us we ought to do? We are certainly not interested in being popular or politically correct, but there is a motivation to pursue ethnic diversity that is deeply rooted in the gospel that we should be able to articulate and exemplify.

We know from Ephesians 1:5-6 that God’s purpose for redemption is for the ultimate purpose of the praise of Jesus’ glorious grace. Because of this, the ingathering of peoples from different nations that is purposed in the gospel specifically glorifies the power and beauty of his grace more than if God had done so only among a particular people group. How so? Ethnic diversity is not an afterthought of the gospel, but it is one of the primary ways in which God’s glorious grace in Christ is magnified. Paul’s apostleship was given for the pursuit of the glory of Christ among all ethnic groups (Rom. 1:5). Jesus’s mission in coming into the world was so that the Gentiles (or nations) might glorify God for his mercy (Rom 15:9). The Great Commission (Matt. 28:19-20) to preach the gospel to all nations is consummated in people from every tribe, tongue, and nation praising the infinite glory and worth of Christ (Rev 5:9-10).

Not only is ethnic diversity purposed in God’s plan of redemption, but it also is a permanent feature in his saving purposes. In the book of Revelation, John hears a great voice from the throne saying, “Behold the dwelling of God is with men, and he will dwell with them and they will be his peoples (plural),” (Rev 21:4). Therefore, ‘colorblind’ mentalities that do not appreciate the beauty of ethnic diversity fail to see God’s intention to preserve our ethnic distinctions in the new heavens and the new earth. Piper says it this way, “the explicit aim of the gospel is to magnify God’s grace in the gospel through the ingathering of an ethnically diverse and unified redeemed people.” He then outlines four specific ways in which ethnic diversity magnifies the beauty of the gospel.

First, there is greater glory in our praise to God that comes from unity in diversity than from unity alone. The psalmist connects the spreading of the gospel among the nations to the quality of praise God deserves (Psalm 96:3-4). He says that we ought to declare God’s glory among the nations because he is great and deserves to be praised among all peoples. Therefore, the praise that the Lord receives from the diversity of ethnic groups is greater than the praise that he would receive from a culturally uniform people.

Second, the greatness and worth of an object increase in proportion to the diversity of those who recognize its beauty. Piper uses a helpful example of a work of art. If a work of art is regarded as beautiful only among a small like-minded group of people, then it probably is not all that great because it does not appeal to the deep universals of true beauty. However, if this work of art produces awe and wonder not only across cultures but across decades and centuries, then its beauty is much more compelling. Likewise, ethnic diversity points to a deeper beauty of Christ because his appeal will be across generations and ethnic cultures to the deepest capacities of the human soul, awakened by the Holy Spirit instead of only a particular type of people at a particular time.

Third, the greatness of Christ as our head is magnified in proportion to the diversity of people he can inspire to follow him with joy. If a leader can only lead a small uniform group of people, their leadership is not as great as someone who can gain a following among a large and diverse people. Paul says he cannot speak of anything else but the greatness of Christ’s work in bringing the Gentile (ethnic groups) to obedience” (Rom. 15: 18). In this, the greatness of Christ as our head is magnified above any other leader or false gods that make pretentious claims to lead the peoples. The more diverse the people groups who forsake their gods to receive the grace of the true God and follow Christ, the more visible is the superior beauty and power of Christ over all his competitors.

Finally, when Christ redeems a people for himself from all the ethnic groups of this world, in effect he undercuts ethnocentric pride and causes all peoples to trust in his grace alone rather than any distinctive of their own. In this way, God’s pursuit of ethnic diversity humbles us and magnifies his free grace. When we see that God’s plan to elect a people for himself before the foundation of the world does not have anything to do with any distinctive of a people group, it causes us to glorify him for his mercy. As we strive for ethnic diversity, we see that God is at work among us to produce a deep humility as he weans us more and more from our deep-rooted pride. In doing this, he is preparing for himself a people— from all the ethnic peoples of the world— who will be able to worship him with humble adoration.

Why Should We Pursure Ethnic Diversity?

In the last post, we focused on ways to see the roots of racism from a biblical lens instead of the economic and political lenses that our culture wants us to use. Similarly, we ought to see the beauty of ethnic diversity through the lens of the gospel instead of something that the church is trying to pursue to keep in step with the culture. The reasons that Piper gives us to consider from Scripture makes me want to strive for ethnic diversity in our church because when our unity in Christ across ethnic lines erupts in praise to God, the beauty of his glorious grace is exalted far more exceedingly than if were from only a few people groups. This deeply rooted motivation in the gospel will last longer than any cultural fad of diversity.