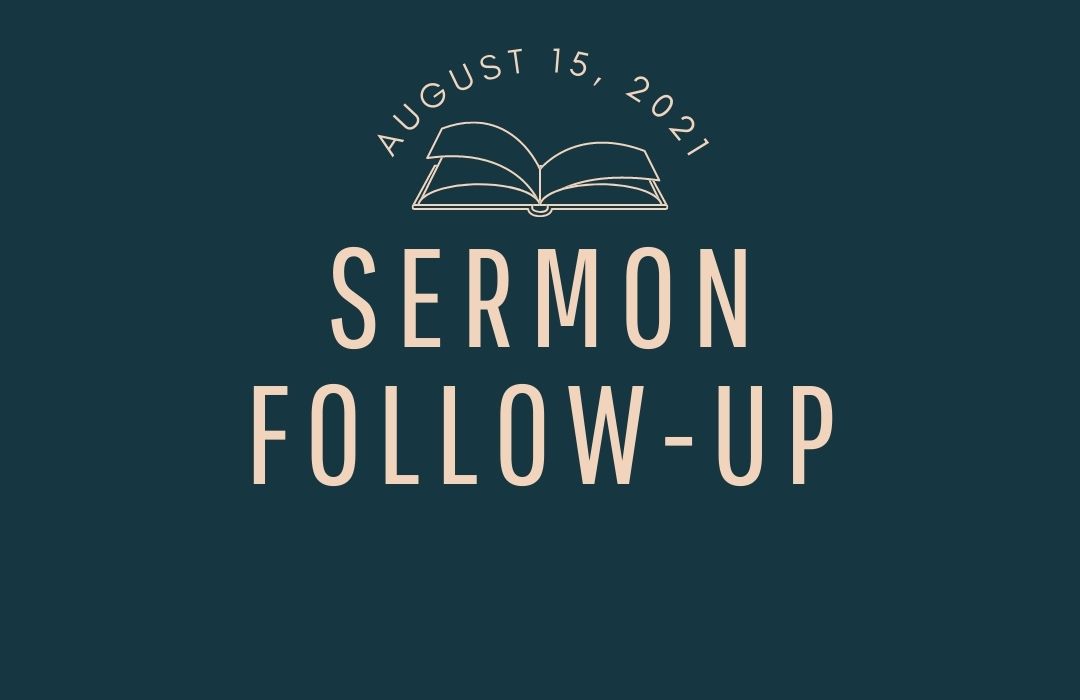 Jesus' last meal with his disciples was a watershed moment. It was a place where the entire purpose for Jesus' coming starts to come into focus. It turns out Jesus' death was not a spinoff of the Passover Lamb in Exodus, rather the Passover Lamb in Exodus was a dim picture of the true Passover Lamb of the Gospels. Jesus came to die and rise again but he wants us to know that his death and resurrection are for us and that the Passover Lamb was sacrificed on our behalf. Now we have the privilege of cebrating Jesus in the Lord's Supper which he started at this last meal with his friends. We have a lasting reminder that leaves us to spiritually fed and rejoicing over this wonderful news that Jesus came to seek and to save the lost.

14And when the hour came, he reclined at table, and the apostles with him. 15 And he said to them, “I have earnestly desired to eat this Passover with you before I suffer. 16 For I tell you I will not eat it until it is fulfilled in the kingdom of God.” 17 And he took a cup, and when he had given thanks he said, “Take this, and divide it among yourselves. 18 For I tell you that from now on I will not drink of the fruit of the vine until the kingdom of God comes.” 19 And he took bread, and when he had given thanks, he broke it and gave it to them, saying, “This is my body, which is given for you. Do this in remembrance of me.” 20 And likewise the cup after they had eaten, saying, “This cup that is poured out for you is the new covenant in my blood." (Luke 22:14-20 ESV)

MAIN POINT
Jesus readily gave his own body and the blood in his veins for you.

1. Jesus is Your Passover Lamb

Jesus was for us a human lamb. An innocent, spotless sacrifice whose blood provided protection from God's wrath. The Last Supper of Jesus is all about Jesus using a significant event in Israel's history to show that there's actually something more significant than that Passover and Exodus point which was fulfilled in Jesus himself.

Hebrews 9:11-26:
But when Christ appeared as a high priest of the good things that have come, then through the greater and more perfect tent (not made with hands, that is, not of this creation) 12 he entered once for all into the holy places, not by means of the blood of goats and calves but by means of his own blood, thus securing an eternal redemption. 13 For if the blood of goats and bulls, and the sprinkling of defiled persons with the ashes of a heifer, sanctify for the purification of the flesh, 14 how much more will the blood of Christ, who through the eternal Spirit offered himself without blemish to God, purify our conscience from dead works to serve the living God.

Heb. 9:15   Therefore he is the mediator of a new covenant, so that those who are called may receive the promised eternal inheritance, since a death has occurred that redeems them from the transgressions committed under the first covenant. 16 For where a will is involved, the death of the one who made it must be established. 17 For a will takes effect only at death, since it is not in force as long as the one who made it is alive. 18 Therefore not even the first covenant was inaugurated without blood. 19 For when every commandment of the law had been declared by Moses to all the people, he took the blood of calves and goats, with water and scarlet wool and hyssop, and sprinkled both the book itself and all the people, 20 saying, “This is the blood of the covenant that God commanded for you.” 21 And in the same way he sprinkled with the blood both the tent and all the vessels used in worship. 22 Indeed, under the law almost everything is purified with blood, and without the shedding of blood there is no forgiveness of sins.

Heb. 9:23   Thus it was necessary for the copies of the heavenly things to be purified with these rites (blood), but the heavenly things themselves with better sacrifices than these. 24 For Christ has entered, not into holy places made with hands, which are copies of the true things, but into heaven itself, now to appear in the presence of God on our behalf. 25 Nor was it to offer himself repeatedly, as the high priest enters the holy places every year with blood not his own, 26 for then he would have had to suffer repeatedly since the foundation of the world. But as it is, he has appeared once for all at the end of the ages to put away sin by the sacrifice of himself.

-What do you find new or eye-opening about Hebrews 9?

-Is Jesus your Passover Lamb?

2. Jesus freely gave his life and his death

Jesus' blood wasn't simply a protection from God's wrath. It was also the way that God would form a new covenant relationship with us. So lest we thing that God has a fickle temper who could "go-off" at any moment, consider the fact that we wanted a relationship with you after dealing with your sin through punishing Jesus in your place. What is more marvelous is that Jesus readily and willingly gave you the very things you needed to have eternal life and be reconciled to God: HIS life and HIS death.

He says, “This is my body which is given for you….and This cup that is poured out for you is the new covenant in my blood.” And we never want to graduate from that simple reality that Jesus has freely offered his life and his death for us. In other words, HE gave himself for ME. John Calvin says, “We must carefully observe that the very powerful and almost entire force of the Sacrament lies in these words: ‘which is given for you,’ ‘which is shed for you.’” Both his perfectly righteous life and his atoning death, given for me. Can we not marvel at the generosity of God? He was under no obligation to love his enemies and yet Jesus spends some of his last moments saying, I am about to die…. And my body and blood and everything that means as a sacrifice for sin… is for you. Here. Remember me in it. Remember me when you eat the bread and drink the cup because I am giving myself over for you so you can have every benefit of salvation in my name.

Galatians 2:20, “I have been crucified with Christ. It is no longer I who live, but Christ who lives in me. And the life I now live in the flesh I live by faith in the Son of God, who loved me and gave himself for me”.

-What does it mean to you that Jesus did all of this (coming, obeying, dying, rising, ascending for you) not purely out of obligation but readily?

-In what areas can you grow in trusting that Jesus really did forgive and put away all of your sin?

3. Take the Lord's Supper for All It's Worth

The Lord’s Supper is an event in the life of our church where we take the gospel so seriously that we participate with sobriety AND intense joy.

“The two elements of bread and wine were intended to preach Christ crucified as our substitute. They were to be a visible sermon, appealing to the believer’s senses, and teaching the old foundation-truth of the Gospel, that Christ’s death on the cross is the life of man’s soul.” J.C. Ryle

-How have you approached the Lord's Supper in the past?

-Next Sunday, how can you better prepare for the Lord's Supper so as to benefit from its richness?

Union with Christ as the Special Fruit of the Lord's Supper.
Godly souls can gather great assurance and delight from this Sacrament; in it they have a witness of our growth into one body with Christ such that whatever is his may be called ours. As a consequence, we may dare assure ourselves that eternal life, of which he is the heir, is ours; and that the Kingdom of Heaven, into which he has already entered, can no more be cut off from us than from him; again, that we cannot be condemned for our sins, from whose guilt he has absolved us, since he willed to take them upon himself as if they were his own. This is the wonderful exchange which, out of his measureless benevolence, he has made with us; that becoming Son of man with us, he has made us sons of God with him; that, by his descent to earth, he has prepared an ascent to heaven for us; that, by taking on our mortality, he has conferred his immortality upon us; that, accepting our weakness, he has strengthened us by his power; that receiving our poverty unto himself, he has transferred his wealth to us; that taking the weight of our iniquity upon himself (which oppressed us), he has clothed us with his righteousness.
The Spiritual Presence of Christ
In this Sacrament we have such full witness of all these things that we must certainly consider them as if Christ here present were himself set before our eyes and touched by our hands. For his word cannot lie or deceive us: "Take, eat, drink: this is my body which is given for you; this is my blood, which is shed for forgiveness of sins" [Matt. 26:26-28...]. By bidding us take, he indicates that it is ours; by bidding us eat, that it is made on substance with us; by declaring that his body is given for us and his blood shed for us, he teaches that both are not so much his as ours. For he took up and laid down both, not for his own advantage but for our salvation.
And indeed, we must carefully observe that the very powerful and almost entire force of the Sacrament lies in these words: "which is given for you," "which is shed for you." The present distribution of the body and blood of the Lord would not greatly benefit us unless they had once for all been given for our redemption and salvation. They are therefore represented under bread and wine so that we may learn not only that they are ours but that they have been destined as food for our spiritual life.

"There Is Power In the Blood"- Bill and Gloria Gaither